Each decade, older adults lose about 3 percent of their lean body mass, mostly muscle, according to Dr. David Heber, director of the Centre for Human Nutrition at the University of California, Los Angeles. This incremental loss of strength, called sarcopenia, is a stealth danger, increasing the risk of hospitalization and death as the years go by. In the United States, an estimated 53 percent of men and 43 percent of women over 80 are sarcopenic. 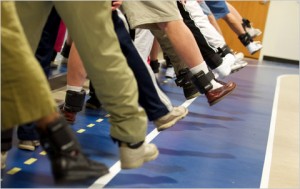 Even when weight loss is desirable, however, it can be accompanied by hidden muscle loss.

“Weight loss by calorie restriction involves losing 1/4 pound of muscle and 3/4 pound of fat per pound of weight lost,” said Dr. Heber. One warning sign that muscle, not fat, is disappearing: the all-too-familiar sagging of skin over areas of normal muscle deposit, like the legs and arms.

Researchers have yet to isolate the cellular causes of age-related muscle loss, but many believe that systemic inflammation and a lack of dietary protein are contributors. Fortunately, in contrast with so many of the physical changes that accompany aging, older muscles do respond to lifestyle changes. Some studies suggest that sarcopenia can be delayed in older adults by certain kinds of exercise and improvements in diet.

“Resistance exercise like weight lifting and increased protein are the best tools to adjust to the loss of muscle with aging,” Dr. Heber said. “Exercise combined with adequate protein intake can lead to increases in muscle mass and performance, even in the very old.”

Adults of any age should consult with a doctor before undertaking a fitness routine or significant changes in diet. Assuming it’s appropriate, Dr. Heber said, a typical regimen might involve 30 minutes of walking each day and modest resistance training three times per week, with an emphasis on various muscle groups.

How to get more protein? “To rebuild muscle in the elderly, you need more than the amount recommended to prevent deficiency diseases,” Dr. Heber said. For older adults, that amount is roughly two ounces daily. Dr. Heber’s alternative: four ounces of fish, chicken or turkey a day, and an additional protein snack in the afternoons to combat a dip in energy. Include vegetarian protein sources like soy or quinoa, he added, to provide variety without dietary fat.

Increased protein intake may not be appropriate for people with kidney disease and certain other medical conditions. Again, consult a physician before making such a change.

Next PostComparison of Weight-Loss Diets with Different Compositions of Fat, Protein, and Carbohydrates